The Annual General Meeting will be held in our hangar on Saturday 16 November at 11.00 am. You are cordially invited to attend and participate in the process. Light refreshments will be served at the conclusion of the meeting.

If attending, please contact the hangar on (03) 9731 1263. If the phone is unattended, please leave a message. To ensure we have a quorum we have included in this newsletter a Proxy Form. If you want to use the proxy, please fill it out carefully and return it to PO Box 156, Werribee VIC 3030 or email to hangar@b24australia.org.au by noon on Friday 15 November 2019. All necessary details are on the form.

Changes to the Constitution

As the number of candidates equals the number of vacancies, there will not be an election for the Executive or the Committee positions. Following are the brief resumes of those standing.

When I stood for President at last year’s AGM, I noted that two critical matters had not been finalized. One was the relocation, restoration and handover of Hangar 1. The second was our Museum accreditation. I am delighted that we have made significant progress regarding Hangar 1. Melbourne Water has committed to the dismantling, restoration and relocation of the hangar and complying with Heritage Victoria’s requirement as a protected WW II structure. I am equally pleased that we have obtained formal Museum Accreditation through AMaGA (previously Museums Australia (Victoria)). This represents an important step in the B-24 Liberator project’s history as it formally recognizes that we meet professional museum standards.

I now have a broad and deep knowledge of the B24 Liberator restoration project, and I believe my skills remain very relevant to our organization in 2020.

Firstly, I would like to acknowledge the dedication of Judith Gilbert who occupied this role for many years. Judith gave a lot to the B-24 Memorial and has elected not to stand for Secretary this year for personal reasons. I wish her well.

My skills and past job experience were largely working within organizations where I was often called upon to liaise both within the organization and with other organizations or individuals to promote a goal. Through this I have an appreciation of process which will help develop the B-24 Liberator Memorial. I also developed practical computer skills, minute-taking skills and business practice that will assist our organization. As we progress, I believe I have the skills to assist the B-24 Memorial to promote both the aircraft and the broader scale of the Museum. That includes the hangar acquisition and management of the heritage collection.

I have personal family links to the war in the north (esp. New Guinea), a part of Australian history that should not be forgotten. This, as well as a love of aircraft, has brought me to voluntary work with the B-24 Liberator Memorial.

I have been associated with the project since the early days in 1990, working on the wing, and when the fuselage arrived, there was so much work to get involved in. Since then the B-24 has progressed well with a line of wonderful and dedicated volunteers, of which I was only a small part. Since I work full-time, I find it difficult to attend the hangar floor. I have made myself available to manage the ancillary tasks of security, disaster management, membership management and reporting, publicity and grants research. I am keen to continue as Vice-President under Lyn Gorman. I will continue with all my tasks and contribute where I can. Please accept my nomination for Vice-President during 2020.

I am pleased to accept the nomination for the position of Treasurer. I have spent 40 years as a Management Accountant; in industries including hand tools clothing import and retail and fast food manufacture. My hobbies include old cars and reading.

I have been involved with our project for 23 years and know most of the people there. The reason I do most of my restoration work at home is that is where my workshop, machines, tools and equipment are located. Now I am retired I can dedicate more time to our project, and am keen to take on a role as armaments person or the like. I am available, as has been the case for numerous years, as a consultant on engineering methods of production in making new, replacement details and components. I am able to contribute my knowledge and experience to our project as required and consider it a compliment to be asked to nominate for committee duties.

I have accepted the nomination for the 2020 Committee of Management. I believe I have a lot to offer especially in the light of the upcoming repositioning and occupation of Hangar 1. I also intend to continue as the Team Leader of the engine restoration group, the outside events coordinator and guest speaker at external organizations. I have also taken on an active hands- on role with the Oxford restoration, overhaul and assembly of the engines and undercarriage, and planning for the installation othe engine mounts and surrounding components.

When I retired, I volunteered with the Heritage Department of the City of Greater Dandenong, being a strong believer in the preservation of our heritage. My work during the five years I spent there included some cataloguing, assisting with exhibitions, photographs, etc. I also have a love of older aircraft and their preservation, so as a volunteer with the B24 Liberator, I am fulfilling both my aims. I have already assumed a range of collection management responsibilities with the B24 Liberator Heritage Collection. I believe my skills are most relevant now that we are an accredited museum.

I began my involvement with the B-24 in 1996. I have served several times on the Committee. I was involved in the sub-committee which enabled our organization to gain museum accreditation. I am currently the convener for the Acquisition Group, which has made considerable progress in formalizing our processes of accepting or rejecting, storing and preserving donated items, as well as updating the relevant records/archiving. In the hangar I am still supporting the restoration of mainly the oxygen and hydraulic systems along with many other artifacts which require cleaning, treatment and preservation.

I have served on the committee for several years and enjoy the role. I have filled the roles of hangar manager and deputy hangar manager. These positions have the responsibilities of opening and closing the hanger for our volunteers, ensuring the security system is serviceable and active. By trade I am a spray painter with aircraft experience and use that skill on our restoration projects. I am also involved with the engine overhaul and running team. I also contribute as a tour guide and assist with external functions. I look forward to another year on the committee.

I have been a member of the B-24 Liberator restoration group since 1995/6, and I have been a Committee member for the last two years. I currently fill the position of hangar manager. If my nomination is successful, I will continue to fill any role I am given.

The Committee for 2020 is solidly constructed to cover by expertise and achievement the relevant tasks and responsibilities to progress the pathway of growth and expansion that will be required to maximize the benefit of acquiring Hangar 1.

We have now created a working bomb release system that reflects the set-up, mechanisms and actions that were required by the RAAF in a B-24 Liberator during WWII.

We believe that this is the only functional B-24 bomb selection and release system that exists in the world for public display and demonstrations.

When visiting the hangar, please request a demonstration of this example of 1940s technology. 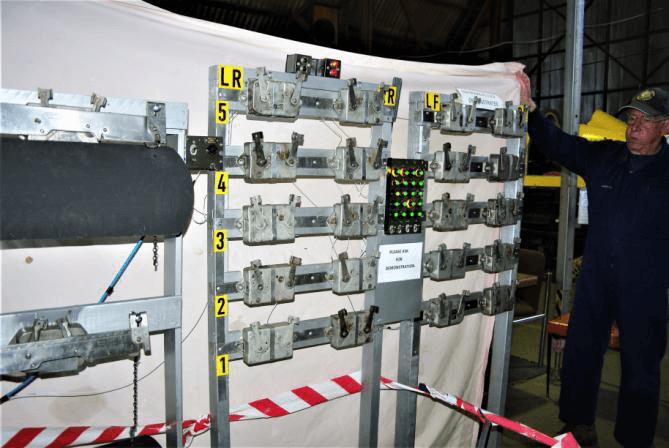 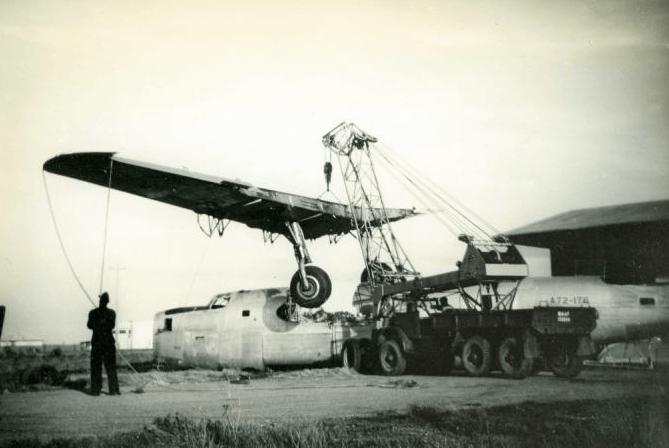 On Tuesday 3 September the second wing of our Oxford was structurally completed. It and the other wing, with the horizontal tail-plane, will now be prepared for painting. Also completed were the elevator trim tabs. Work on the centre section has recommenced with the assembly being ‘tilted’ in the jig to make the underside more accessible. Again, the amazing skills of Doug and Ken were brought to our attention. The two engines are being restored by our engine crew and continue to progress in conjunction with the engine nacelles metallic items. During October, four of our Oxford crew will be attending a ‘wooden’ aircraft training course at Bacchus Marsh airfield.

An informal meeting was held at the hangar with Melbourne Water representatives on 27 August. The purpose of the meeting was to introduce the new Project Manager, Evelyn Mugisha, appointed to replace Brian O’Driscoll who has moved to other duties. There are several minor items raised by Heritage Victoria to be resolved by Melbourne Water prior to moving from the design stage to calling for tenders. Both parties made a commitment to regular (quarterly) meetings to maintain the communication that has occurred in the past.

In the August edition we included a poem titled “Whiskers Blake”. It has come to our attention that Mr Blake arrived in Australia from England in the early 1930s during the depression. As Mr Blake was 6ft 8inches tall, he joined the agricultural show circuit as a boxer/wrestler challenging all and sundry to knock him down for the purse of 5 shillings (50c).

As WWII severely curtailed the show circuit, Mr Blake took to his bicycle, going around Victoria searching for work. Hence his journey through Sale and his little bit of immortality. 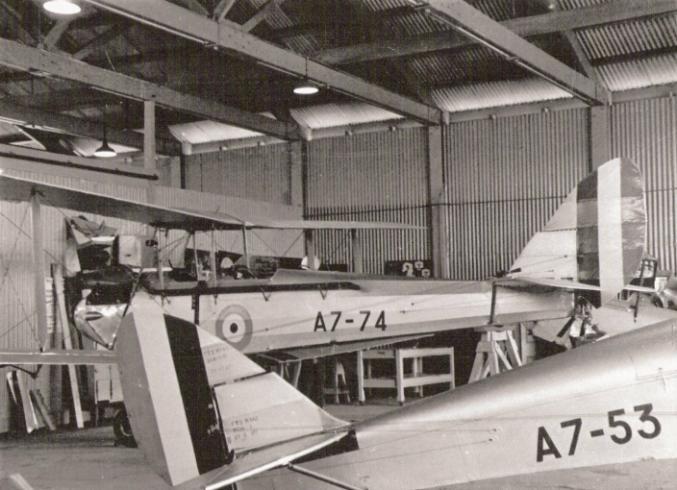 This is another one of the photos from Ed Crabtree’s collection, taken at Parafield in South Australia during 1940. It illustrates a De Havilland Gypsy Moth being re-assembled after overhaul. 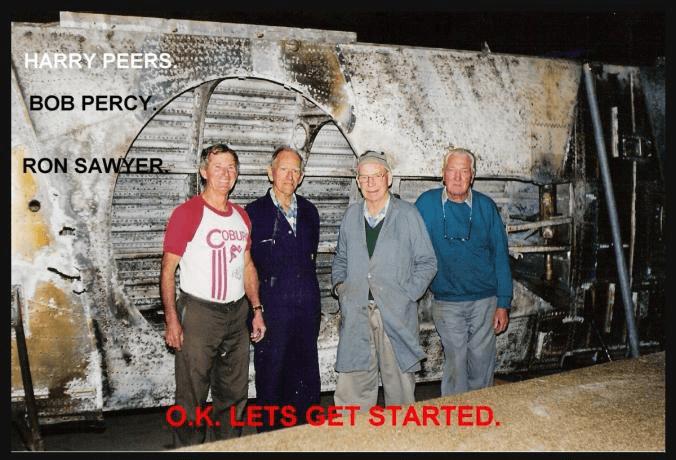 These gentlemen were part of the original restoration team about to start on the Liberator centre section during 1992. This team had the vision and faith that A72-176 would eventually be returned to its former glory. This attitude was handed down to the follow-on members and volunteers and has driven our quest for success.

A Seniors Festival event will be held at the hangar on Tuesday 15 October from 10 am to 2 pm.

If you are drinking to forget
Please pay in advance

Behind every great man there is a surprised woman.

As this is the last Newsletter before the Annual General Meeting, I wish to thank the outgoing Committee for their work and support over the past 12 months. I also thank Dave Miller for taking on the task of compiling this Newsletter. It has been a year of significant achievements, including receiving our museum accreditation certificate, very promising developments regarding Hangar 1, having our aircraft added to AMNN’s register of significant aircraft, and good progress in the building of our replica Airspeed Oxford. I strongly encourage members to attend the AGM on 16 November. If you are unable to attend, please return your Proxy Form. We rely on members who attend and completed Proxy Forms received to achieve a quorum. I hope to see you at the hangar then.