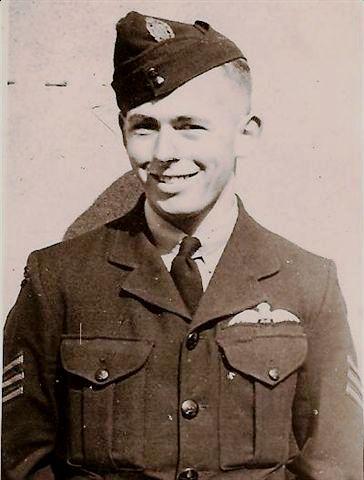 I was born in Melbourne in July 1925. My father had served with the AIF in Egypt and France during World War I and my mother had been a nurse. I was the third child of the family, having an older brother and sister. Ours was a happy family living in Alphington where we were brought up to respect our elders and the law. My dad had a friend (and neighbour) who had been a pilot with 3 Squadron, Australian Flying Corps. He served in France and, in the early 1930’s, he took us to an AFC reunion at Point Cook where I had the thrill of sitting in the cockpit of a Westland Wapiti, the RAAF’s bomber of the time. This experience whetted my appetite for aircraft and afterwards, my brother and I, made regular trips on our bicycles to Essendon aerodrome to see (and smell) the many different types of aircraft using that field.

I did my primary schooling at Fairfield State School and then went to University High School. During 1940, our maths teacher, Mr. Fred Syer, had a significant part in framing the curriculum for the Australian side of the Empire Air Training Scheme and quite a number of our maths periods were taken up writing copies of his blackboard notes for this project. Once again aircraft intruded into my life.

I just could not wait until I was old enough to enlist. So I joined the Air Training Corps in which my brother was an instructor. After 18 months as a cadet, I was called up on the 13th August 1943; just 2 weeks after my 18th birthday. I was posted to the Initial Training School at Somers. My sister had already been a member of the WAAAF for some 18 months.

Very quickly, I discovered that members of the pipe and drum band were given leave every weekend instead of only one weekend in two. Having played an instrument in the bands at both Fairfield and UHS, I had gained a fair idea of how to play a side drum, so I auditioned and got the job. My heart bled for my mates who had to stay in camp and do clean up duties at the weekend.

At Somers I was categorized for pilot training and was posted to No. 11 Elementary Flying Training School at Benalla where we learned to fly Tiger Moths. That was tremendous fun - flying as it was meant to be. On completion of the course, we were posted to No.1 Service Flying Training School at Point Cook to train on Airspeed Oxfords. This course involved, in addition to flying, such things as navigating and high (and low) level bombing on the range west of Werribee. A good deal of the early training in flying the aircraft was done from the Werribee satellite field, which is where the Liberator is currently being restored.

On one occasion, my “crash mate”, Graham Lee, and I were on a navigation exercise over western Victoria and were slightly unsure of our exact position on the way back. There was a railway line below us with a Station not far to the north. So we went down and flew through the Station to read the name, “Stoneyford,” on the nameplate. Actually, we were quite close to where we thought we were.

We became qualified pilots in early September 1944, after a couple of extensions to our course. This apparently was caused by something of a ‘surplus to requirements’ of aircrew. After some time in Pool at the MCG (and in clerking at the Directorate of Postings at Albert Park), we were all posted to either navigation or bombing and gunnery schools as staff pilots. I and one other, Doug McNamara, went to No.2 Air Observers School at Mount Gambier where wireless navigators were being trained for ultimate postings to such aircraft as Beaufighters and Mosquitos. Here the aircraft were Avro Ansons; a slow, sedate mid-1930’s aircraft which almost flew itself. The work was quite interesting however, with many navigational tasks being patrols and searches off the coast which involved keeping an eye open for any shipping that looked ‘furtive’.

What made a ship look furtive was never explained to us. We also did a lot of very low level work involving mock attacks on targets.

After several months of this work, Mac and I were posted to No 7 Operational Training Unit at Tocumwal to convert to Liberators. Crews were formed and, just a couple of weeks into the course, our skipper was posted to a transport squadron. This put the crew back one course (a month) and gave us a new skipper. He was Flight Lieutenant Peter Frizell, DFC, who had done two tours on Sunderlands over the North Atlantic during which time he sunk a U-boat.

Pete was a meticulous pilot and the whole crew of 11 quickly became a close family; each feeling confident that the others knew precisely what they were doing. The Liberator aircraft was a revelation into what a modern aircraft really was. It was very “friendly” to fly and had no vices and, for the pilots, it was very comfortable. Not so for some of the other crew members, the engineer for example, having nowhere to sit but on the floor. During a 12 hour trip this must have been tiresome.

The OTU course involved: long distance navigation, largely over the sea; both high and low level bombing; and, air to air and air to ground gunnery. The course served to make us a unit capable of getting the aircraft to do what it was designed to do. We only had one moment of concern during this course. We had been way out over the Pacific Ocean to bomb the wreck of an American cargo ship which was stuck high and dry on the rocks of Middleton Reef. On the way back, while still some 100 or more miles off the coast, the No.1 engine started rotating some 30 degrees either way in its mount - obviously threatening to break loose. We immediately stopped the engine and headed for Sydney where we landed at Mascot. There the Americans were detailed to see what was wrong and they found that the ignition harness had short circuited causing only the cylinders on one side of the engine to keep firing. It took them 3 days to fix the trouble. During which time, we toured Sydney; which I had never seen. We did not complete the course until May, 1945 by which time the European war was over, and the Pacific war was rapidly heading the same way. Thus we had little chance of being part of the war effort. The course was posted to Cecil Plains in Queensland to form No. 102 Squadron. Our posting was virtually completed about the same time that Japan surrendered; which was August, 1945. Our skipper was granted a discharge - he joined the Australian National Airways - and, as a consequence, I was also discharged.

Back in Civilian Life

On return to civilian life, I was given a cadetship to the City Engineer at Heidelberg where I learned civil engineering on the job whilst attending night classes to study for the Diploma of Civil Engineering. I eventually became the Design and Contracts Engineer and was, in 1959, approached by a Sydney Consultant with an offer to open, and manage, the Victorian branch of his practice; I accepted this offer. In 1985, we separated the Sydney and Melbourne practices and I became Managing Director of the new practice and I held this position until the year, 2000. I then accepted a request from the Victorian Urban and Regional Land Corporation to become its construction manager; the position I held until I retired in 2008.

Meanwhile, I was married in 1950 and had four children: Helen, David, Robyn and Andrew. We built our house in Heidelberg, a process which occupied my weekends and holidays for nearly three years. We lived there until 1959 when we were offered a price we could not refuse and we moved to East Ivanhoe where my wife and I spent many happy years watching the children grow up and become successful. The only cloud was Robyn becoming ill resulting in her death in 2004.

At the same time, my interest in music led me back to brass bands (in addition to piano playing) and I played with the City of Heidelberg and then the Kew Citizens Band of which I finally became the deputy musical director. The highlight of this part of my life was the Kew Citizens Band’s concert tour of the Philippines in 1980.

With all these other things to occupy me, I still felt the urge to be associated with the Air Force. In 1952, therefore, I joined the RAAF Reserve and became an instructor with No. 2 Flight of the Air Training Corps at Preston where I remained until 1959; having been both the Adjutant and the Chief Instructor. I was then posted to No. 16 Flight, North Melbourne, as Officer commanding; the post I held until I retired in 1969. These years were most rewarding; helping young lads become young men with knowledge of aircraft and the service; and, seeing many of them achieve creditable careers in the air force.

Having severed this interest, I was fascinated, whilst listening to Ian McNamara’s programme on ABC radio one Sunday morning in 1992, that Bob Butler - whom I had known in the ATC - was leading a group who were starting to restore a B24 Liberator as a memorial to all who had served with these aircraft during the war. Investigation of this report led me to Werribee where I have been a worker on the aircraft to this day. I have worked three days a week on the project and I am thrilled to see it nearing completion.

There were moments of despair in the early days when I saw the bits of corroded metal we had to start with. I have learned many new skills doing this work and have gained immense satisfaction from it.

All in all, I don’t think I could have fitted much more into my life and have a sense of quiet satisfaction in what I have done; and done to the best of my ability, a value with which each member of my family also pursues.

Editor’s foot-note: John, one of our earliest members, passed away in January 2016. A tribute is in the February, 2016 Newsletter.